Working as an Employment Consultant is incredibly rewarding. You get to meet and support kiwis from all walks of life, with every day bringing new opportunities and challenges. You only have to read a few of our client stories to see how much of a difference Employment Consultants make in the lives of clients and their families.

We are looking for people who want to make a difference, believe in the work we do and have a genuine interest in the role to join us as an Employment Consultant.

"I worked alongside APM when I was working at MSD. I admired the work and support offered to my clients by the APM consultants. When the position of Employment Consultant became available in my area, I jumped at the opportunity. I’m looking forward to working with clients and empowering them into work." - Lorraine Erikson, Employment Consultant

Is Employment Consultancy for me?

Our people are dedicated, approachable, and passionate about making a difference for New Zealanders. We are looking for people who share our passion and strive for excellence, both clinically and in service to clients. There are opportunities for full-time, part-time or contractor positions.

APM Employment Consultants come from a range of careers, including sales, kaupapa-māori services, business development, government, social services and industry. Bring your transferable skills and the passion you have for people and their success.

Plenty of positive energy – your clients will look to you for encouragement and motivation on their journey.

Passion and dedication – you must be passionate about making a difference and seeing people improve and transform their lives.

Persistence and resilience – the pathway to employment isn't always straightforward and each client has their own unique challenges to be overcome.

Autonomy and self-management – you'll be in charge of your own caseload, and will need to manage your time (and paperwork!) effectively.

Empathy and compassion – our clients come from a range of backgrounds, many of whom will be vulnerable with many barriers to finding work. You’ll bring your life experience and warm personality to build relationships and engage with your clients.

You’ll have a caseload that includes a variety of clients at different stages of their employment journey. A typical day can include any of the following:

You'll be supported by regular meetings with your manager and enjoy opportunities for ongoing learning and development.

Every day is different...

Kirsten Job shares what it's like working as a Social Worker for APM Northland.

Learn about how Pete and Olivia are making a difference working with Youth Employment Success in Greymouth.

Senior Employment Consultant, Georgia Boulanger, talks about why she is passionate about her work at APM.

Tangi's Story (in his own words)

My name is Tangi, and I am reaching the end of my time with APM so I wanted to share what this experience has done for me during my time working with Georgia (and sometimes Tash) at APM Waikato.

When I was referred to APM I had been out of work and study for about two years and the state of my mental health was such that, at the time, I could not see a way forward under my own power. I have struggled with anxiety, depression and a host of other mental health issues since childhood and once I finished studying and could no longer spin my wheels I ended up self-isolating and disassociating from everything. Though I was dissatisfied with my situation - I did not have the energy, tools or mental bandwidth to dig out of the hole myself.

It was from here that I started working with Georgia and began to chip away at the obstacles and habits that had calcified in my mind. She outlined plans, tasks and goals that were productive without being overwhelming. She introduced me to people that I could trust and who she knew would take my problems seriously. I got diagnoses, medication, therapy through her support. She connected me with seminars and corresponded with people like my psychologist to improve communication and employ coping strategies that I can use. She taught me a myriad of skills to do with job hunting and interviewing. There is too much to list but the end result is that I am now confident, capable and motivated. In far more areas than just job hunting, I feel empowered and optimistic in the future so I have to thank Georgia and APM for that.

I have had experiences with other organisations trying to help me and I've thought a bit about why those efforts have failed where this succeeded. I think Georgia's interpersonal skills - the ability to encourage, ease anxiety and foster trust was important. She was very conscious of my feelings and capabilities which allowed us to make consistent progress without stagnating or feeling paralysing. I think the fact that the organisation was disconnected from WINZ allowed me to feel safe spending the time I needed to piece things together. As well as the explicit commitment to support me over quite a long period of time.

Anyway, those are my thoughts. As you can imagine, this experience has been important for me and I did not want that fact to go unrecognised. I hope others will find the value in APM that I have in the future.

Max is a young man from the North Island. He moved to Central Otago but had no family, friends or support group there. He had never been employed for an extended period.

When I met Max he was living in his car and in a really bad place. Deep down he was really wanting someone to believe in him and give him the tools needed to succeed.  I met with Max a few times and I realised how important it was to get him into work as it was compounding his mental health.

I found him some casual work at a Orchard but I knew my work wasn’t done... he was still living in his car.  He soon got an opportunity to apply for a 3 month contract at GSL Orchard in Roxburgh. From speaking to the manager, I was learned there was potential for more work and also staff accommodation... perfect!

Max and I practised interview questions and answers and I offered to call him an hour before. He said that would be great as he needed “a cup of confidence”. His interview was a success and he got the job! After only one week, his contract changed to permanent fulltime with the help of Flexi Wage.

I went to Roxburgh yesterday to visit and have a catch up, Max was proud to share all his duties and responsibilities and that he had been given a work truck to get from the house to the orchard. His sleep had improved and he was excited about his future - he even had a new haircut!

I started working with Westin on my return to work in mid-February. Westin lost his previous job due to Covid-19 lockdowns, and had been unable to find a job since. The first thing we did was get a 4-week extension applied to Westin's programme. This gave us enough time to help him into employment. We did a quick update of his CV and cover letter, a refresher on interview questions/scenarios and he was off!

Westin made my job such a breeze. He was so motivated and determined to find employment; it made him a joy to work with. Westin was able to secure himself four interviews within the first two weeks! After every interview, no matter the outcome, Westin never lost his motivation to find employment.

Then it all happened so quickly. A phone interview on the Wednesday, offered a position on the Thursday, collected his contract on the Friday, and starting on Monday! Westin finally got the opportunity he was looking for. He is now a full-time employee at Concrete Structures in Rotorua – an industry he wanted to work in from the beginning. I am so happy that I was able to help Westin into an an industry and job that he is absolutely loving!

Romulus is 35 year old man who returned to Roxborough, NZ as a 501 deportee with significant convictions and jail time. Roxborough is a remote town in Central Otago with limited options for an individual with no driving licence, transport, limited literacy support, and attending Probation.

When I met with him I found him to be a genuine individual seeking a new life and wanting support to work within his community. He was struggling to locate an employer due to his significant convictions and time out of the workforce.

We discussed his personal short and long term goals. He wanted to get a job and driving licence to show his family he had turned over a new leaf, and reconnect with his children.  We had a group conference with his Probation Office and confirmed how we could support him with confidence building and interview practice. We were able to contact a long standing employer in Australia who reinforced our clients capability, from there we were able to connect him with a local employer who was more interested in his future than his past.

Romulus has now found employment. He was initially was hired to work in an orchard but after only three days, his employer is preparing to move him into further roles given his experience in driving and transport.

Why our Employment Consultants chose APM...

"I love to see our people succeed! With my background in work focused case management I felt I had the skills and networks needed to execute this role." - Kapitorina Hall

"I was actually a client at APM and was inspired by the help and generosity I received. I am looking forward to being able to provide the same help to other people in my community." - Olivia Cooper

"I was aware of APM through acquaintances that worked here. I was drawn to the idea of motivating people to get into work! I am excited about helping people to enter the workforce, improve their mental health and create positive change." - Natasha Jeanes

"I joined APM as I was seeking a new challenge. I have always enjoyed people focused roles and love working in a team. I’m excited to make new friends, grow my skills, and connect with kiwis looking for employment!" - Hayley King

Benefits of working at APM

Being part of the APM team is fulfilling and rewarding. We strive to be an employer of choice by prioritising the wellbeing and growth of our people.

We've created a flexible and supportive workplace to enable a work/life balance that works for you. We invest in benefits to support our people to provide the best possible service to our clients.

Our core values support our mission of enabling better lives and are reflected in our work and the outcomes we achieve. 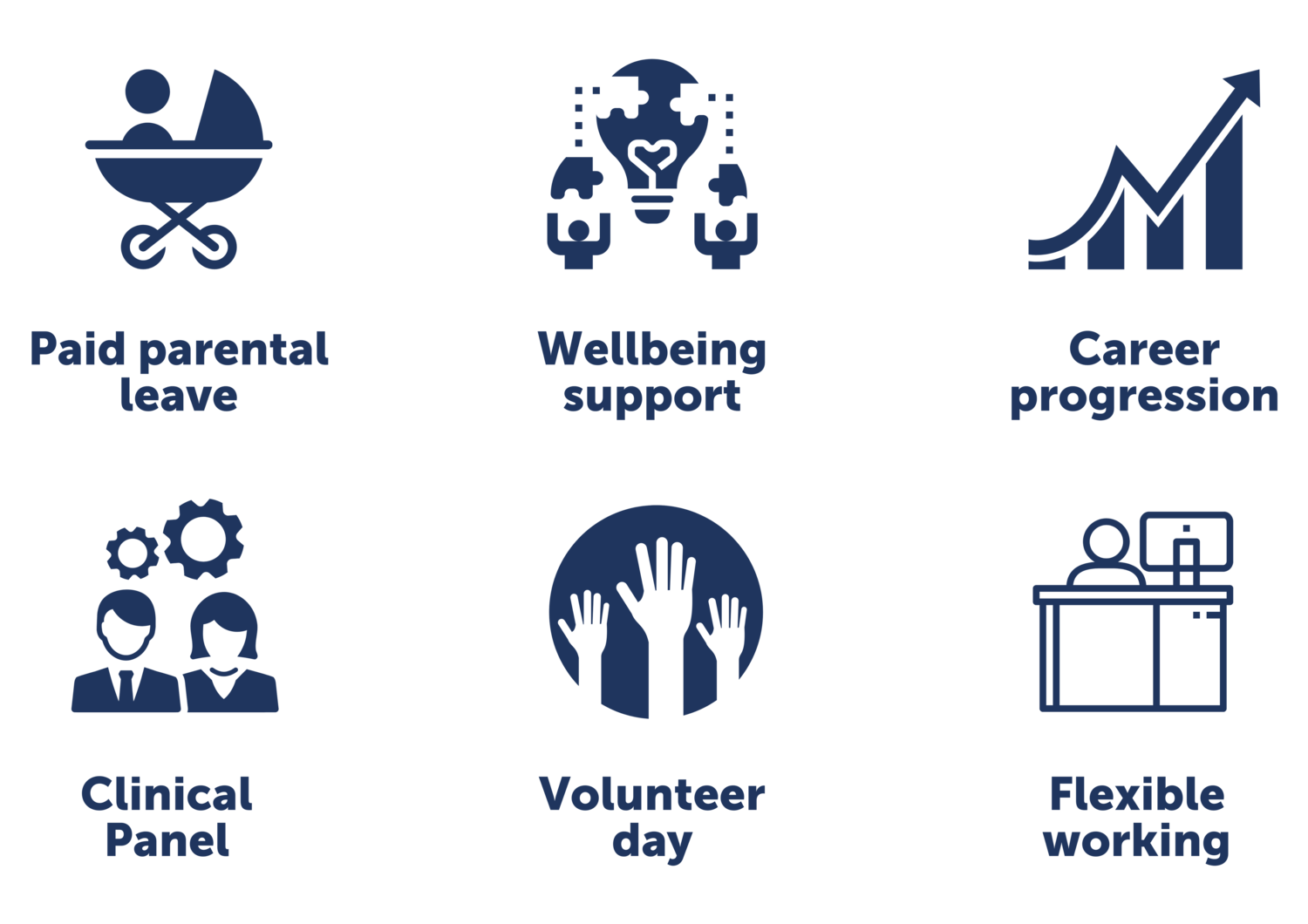 Join our talent network to stay up to date with the latest jobs that match your preferences. Unsubscribe any time.

Please note that accepting cookies will override your browser's "do-not-track" signal if used.

These cookies allow us to count visits and traffic sources to measure and improve the performance of our site and the candidate experience. This cookie is optional, however If you do not allow these cookies we will not know when you have visited our site, will not be able to monitor its performance and you may have a diminished candidate experience.